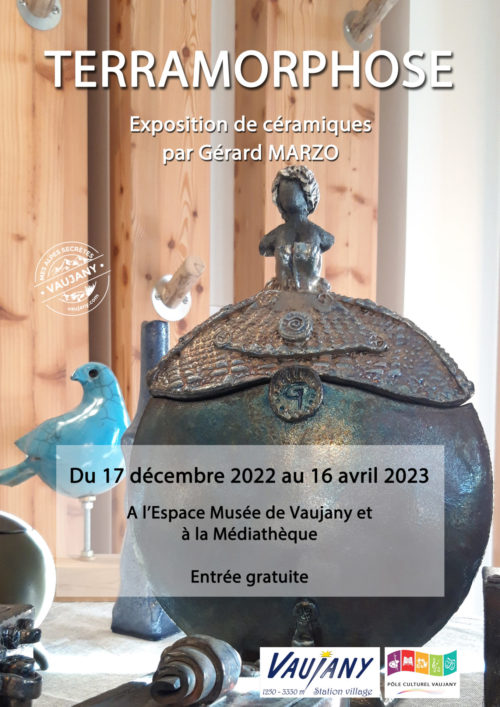 Ceramist, a profession with heart and passio

Free exhibition visible from December 17, 2022 to April 16, 2023.
At the Pôle Culturel, during the opening hours of the museum and the media library.

Earth is a noble material, who has not dreamed as a child to play with mud!…

The realization of a piece generally takes place in 3 phases:

Shaping of the raw clay, followed by its complete drying.
Firing at 1000°C.
Enameling and 2nd firing (from 1000°C to 1300°C) depending on the clay and the desired effects.)
Firing is generally done either in an electric kiln or in a gas kiln.

Gerard MARZO has a solid knowledge of shaping and masters this know-how. Working with ceramics requires imagination and a pronounced aesthetic sense. The ceramist must be patient and meticulous. Rigorous, attentive to details and precise in the execution of technical gestures.

RAKU is a low temperature pottery firing process of Japanese origin. Originally, the ceramics produced were used for the tea ceremony.

The glazed pieces are fired in a gas kiln, taken out with tongs, at a temperature of 1000°C and immersed in a combustible material (sawdust, straw, pine needles, newspapers,…) which ignites instantly. The thermal shock and smoke give particular effects, characteristic of this technique.

Most of the pieces exhibited are “RAKU” pieces, shaped and fired in my garden, in VAUJANY.